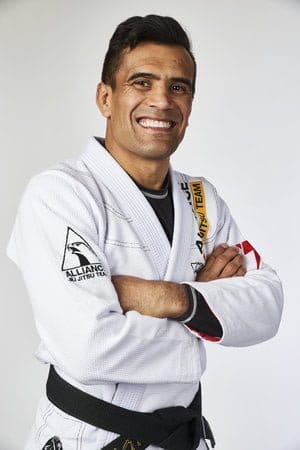 When Rubens “Cobrinha” Charles won his third straight ADCC world championship in 2017, he became a victor in all five major grappling and BJJ competitions, thus winning what is known as the “Super Grand Slam”.

His finals win, at -66kg at the 2017 ADCC Worlds, was a 6-0 dominating performance against one of the most well-rounded grapplers in the world, American AJ Agazarm. Not only is AJ Agazarm a jiu-jitsu black belt, having been awarded that rank in 2013 by Eduardo de Lima and Carlos Gracie Jr., but he also was a Division I wrestler at Ohio State. In that match, which saw mainly wrestling techniques used, “Cobrinha” out-wrestled him for almost the entire 20 minutes.

His wrestling coach, former University of Iowa wrestler Kenny Johnson, who was coached by the legendary Dan Gable, and now of Bolt Wrestling, added that “Cobrinha” hadn’t even trained in all wrestling positions yet, but that “the positions we went over, he’s a black belt” in wrestling.

“Cobrinha” added that his jiu-jitsu “is getting better because of wrestling.”

And he stressed the unbreakable ties between wrestling, grappling, and BJJ: “I recommend, train wrestling, because it’s married together.”