Patrick Cote to drop to welterweight 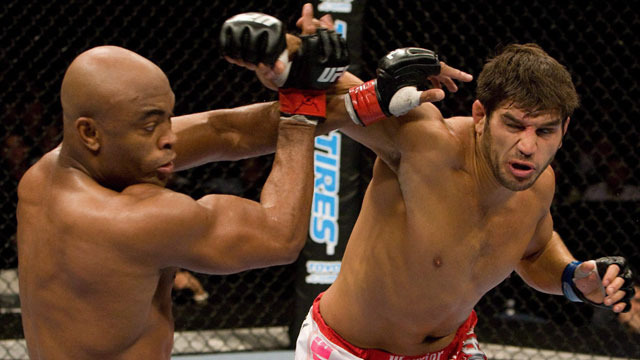 UFC fighter Patrick Cote announced on Wednesday that he will drop down the welterweight division for his next fight. "The Predator" said via his Twitter account, "My next fight will be at 170. Thanks for the support."

Cote had been scheduled to rematch Alessio Sakara at middleweight. However, earlier this week, news broke that Sakara had been forced out of the contest with an injury. Cote won their first match via disqualification at UFC 154 after the Italian landed a series of illegal blows that finished the fight.

The Quebec native made his UFC debut all the way back at UFC 50 in 2004. He took on Tito Ortiz on extremely short notice after Guy Mezger dropped off the card and subsequently retired. Cote bounced around the UFC before putting together a five-fight winning streak between 2007-2008 and earning a title shot at middleweight champion Anderson Silva.

In his title challenge, Cote suffered a knee injury in the early portion of the third round. After an almost two-year absence, he returned to the UFC in 2008 but dropped back-to-back fights and left the promotion.

Cote earned his way back to the UFC with four-straight victories in Canada and Brazil. He is 1-1 during his current run in the UFC.