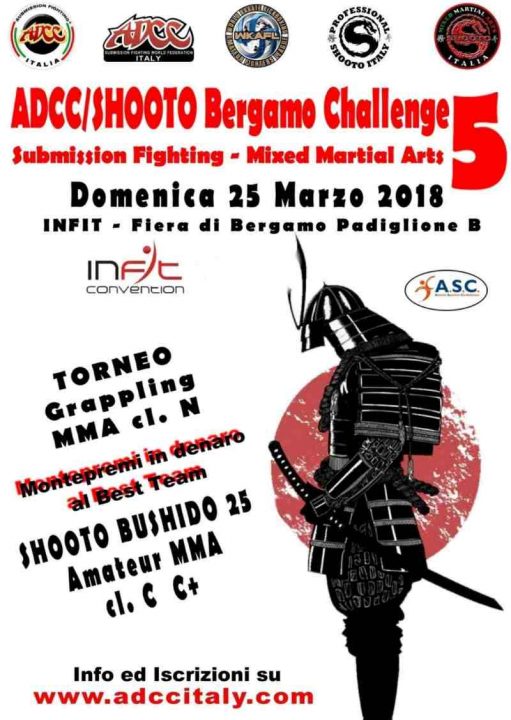 One of the many athletes competing at the ADCC Italy event on Sunday, March 25, in Bergamo, known as the North Italy Trophy competition, will be Tom Maenurm of Team Scardovelli. And he is moving up in competition.

He last competed only a few weeks ago, on March 3, at the ADCC Italy Milano 2018 event, in the -76kg intermediate male division. Representing Team Scardovelli, he finished first there, with Lorenzo Sanvito of Ares Team Lodi finishing second and Simone Albani Rocchetti of Legio X Magnum in third.

Tom Maenurm also has several victories in ADCC events. He had two superfight wins, both by armbar, at the ADCC Italy Gorizia Challenge on October 31, 2015. He also won two superfights at the ADCC Italy event on April 30, 2016, also in Gorizia, one by armbar and the other by foot lock. At the ADCC Austria Winter Challenge on December 17, 2016, he finished first in the beginners -76kg division. And after that win on March 3 in the intermediate male division, he is moving up again.

According to Fabrizio Scardovelli, the technical director of Team Scardovelli, for Sunday’s ADCC Italy event in Bergamo, Tom Maenurm will be competing in the professional -77kg division.

We shall soon learn how he will do in this match, but Tom Maenurm is an athlete to watch.

Despite his impressive record in ADCC, it looks like Tom Maenurm will have to wait a little bit longer to move up to a higher level of competition.

After a series of victories at -76kg in the beginners and then intermediate male divisions, he had been scheduled to compete in the professional division at -77kg at Sunday’s ADCC Italy event in Bergamo, Italy. But now this representative of Team Scardovelli will have to wait.

“Unfortunately I will not compete this Sunday because they didn’t find me any opponents,” he wrote us on Saturday.

Such things happen, but you can be sure that Tom Maenurm, whose Facebook profile picture includes the ADCC logo, will continue training and be in action on the mat very soon.