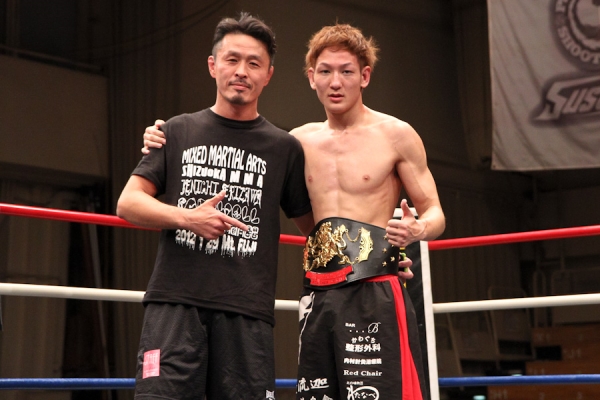 Onojima may be a winner of last year's Infinity tournament but that was for Shoot's class B fighters. Therefore, although Onojima's pro MMA record is not too bad at 6-1-1, Sasaki, who is a current Shooto pacific rim champion, that has pro MMA record of 11-1-2, on paper, is far better than a 29-year old from team Combat Workout Diamonds.

"Uruka" used to fight at 145 lbs but came down to Shooto's featherweight which is at 132 lbs, just for one reason, and that is, to fight Kyoji Horiguchi.

Sasaki has publicly said this more than few times.

Horiguchi just became Shooto's world champion at this weight class earlier this month so, for a current Shooto's pacific rim champ, Sasaki probably didn't have to do this fight to secure a title shot against Horiguchi. But, he decided to step up and do this fight. Maybe, he is confident. Also, he probably felt better to be active since he last fought in January and apparently he didn't have any fights confirmed at the moment.

For a grappler like Sasaki, the fight against a striker who has won in both Shoot Boxing and Kickboxing bouts can be dangerous but, obviously, a 23-year old is feeling OK about this fight.