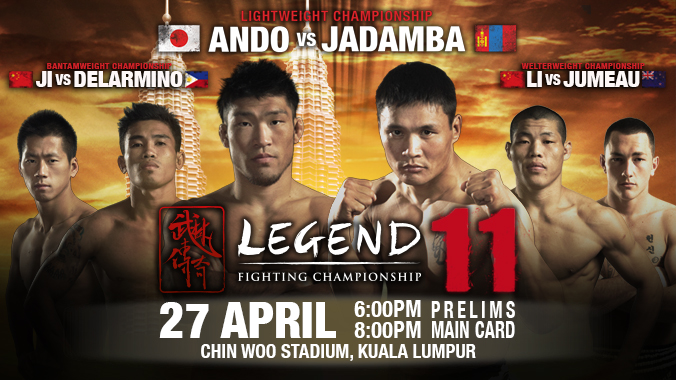 Legend Fighting Championship, the Asia-Pacific Championship of MMA, has finally released the confirmed fight cards for Legend 11 today. Legend 11 will take place on April 27 at the Chin Woo Stadium in the heart of Kuala Lumpur. Featuring twelve action-packed fights including three Asia-Pacific title bouts, Legend 11 promises to be an unforgettable night of world-class martial arts.
Please see below and attached for our full fight card:

Undefeated for almost seven years, Legend Lightweight Champion Jadamba Narantungalag has cemented his status as one of Asia’s top pound-for-pound fighters by defeating elite lightweights such as Akihiro Gono, Adrian Pang, and Nam Yui Chul. But he faces his toughest challenge to date in Japan’s Koji Ando, a ground-and-pound specialist who will be looking to take the Legend Lightweight Title back to Tokyo.

With former Legend Welterweight Champion Bae Myung Ho recently conscripted for South Korean military service, top contenders Luke Jumeau and Li Jingliang will now battle for the belt. Legend fans will remember Jumeau from his Fight Of The Night bout against Alex Niu at Legend 10 – the sort of performance he will be looking to repeat. And having narrowly lost a decision to Bae in his first attempt at the Legend Title, Li is determined not to let the belt slip through his grasp again.

The contest for the Legend Bantamweight Title will see a classic striker vs. grappler battle, as Filipino knockout artist Agustin Delarmino, Jr. squares off against Chinese submission specialist Ji Xian. Delarmino aims to become Legend’s first ever Filipino champion, avenging his brother Leonard’s loss to Ji in the process. But the China Top Team product plans to finish the fight in the same method as nine of his ten victories: by tapping Delarmino out in the first round.