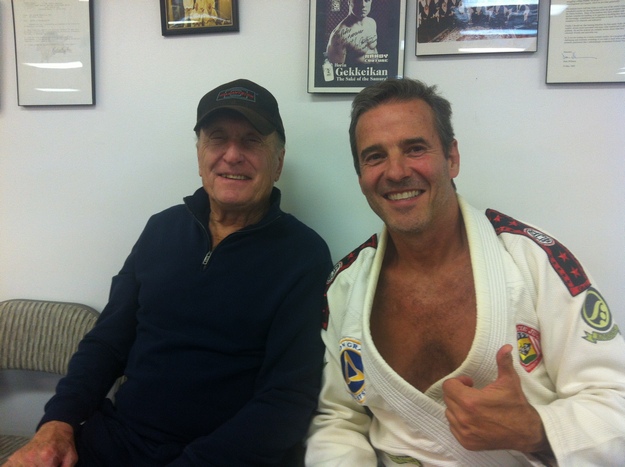 As if we needed any further proof of the penetration of BJJ in the World lifestyles, word comes to us that Hollywood legend Robert Duvall and his wife Luciana are taking Jiu-Jitsu lessons with Master Pedro Sauer. An Academy Award winner, Duvall has been a regular at the academy and according to Pedro: "Is a super nice guy and tough as nails!"

A lot has been said by BJJ authorities and aficionados about the DQ of both Keenan Cornelius and Paulo Miyao in the Brown belt absolute finals of the World Pro 2013. Many great points have been made by all parties and there is no point repeating them however, in my opinion, I have watched too many matches where the two competitors are inter-locked for the duration of the match and nothing happened. While I can appreciate strategy as much as the next person, if we don't have interesting matches with some action we will lose spectators and or worse. It doesn't matter what rules you have, the top competitors usually can work within the boundaries of the rules and "get away" with how they perceive is the best way to achieve victory.

While there are many top fighters today who go for it no matter what, there is a growing tendency, as they near or reach the finals, for some competitors to tighten up and try to win by the narrowest of margins and this makes for boring matches that very few people can appreciate or want to watch. I have always been of the opinion that it is up to the referees to help conduct the matches in a  dynamic fashion, so I commend the decision by referee Luciano Mendes to DQ both fighters. While it is a shame for both fighters to be DQ'd, if that is the beginning of change for our sport then so be it. I clearly remember during one Worlds when the Japanese super-reporter Kinya Hashimoto turned to me and said: "I'm tired of these matches, all I need is one photo at the start of the match to tell the entire story as nothing changes"

Let's hope that referees and fighters alike learn from this and decide to play a more dynamic and open game that they are more than capable of exhibiting. And in the end Jiiu-Jitsu wins and we all win!