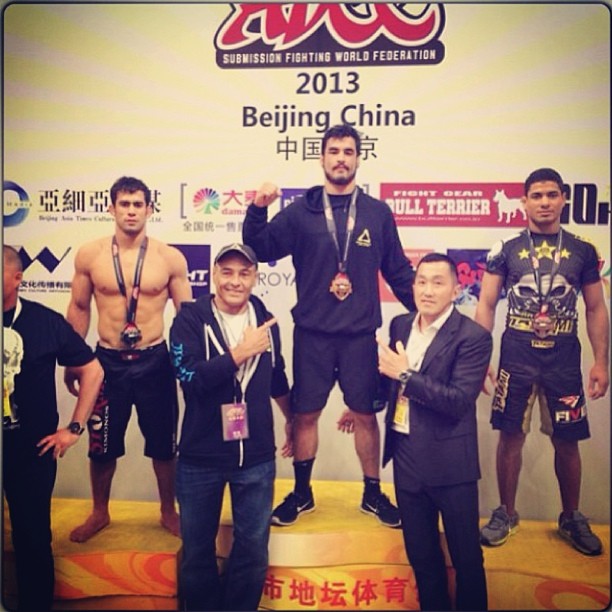 After watching another edition of the greatest submission grappling event on earth some final thoughts.

ADCC continues to set the standard for high level submission grappling, it shows that ADCC is not Jiu-Jitsu nor wrestling nor Sambo but its own modality and if you want to be successful you better learn to play that game. Romulo Barral was perfectly correct to state that: "I didn't play Jiu-Jitsu, I played ADCC."

ADCC is a tournament that, with rare exceptions, you need experience in the event in order to win. Take for instance many of the winners this year, Andre Galvao (Superfight) won the weight and absolute in his third ADCC, same with Rubens "Cobrinha", Roberto "Cyborg" and Kron Gracie. Barral was his second time around.

"Cobrinha" and Rafael Mendes always put on a great battle in their final, this was the third time in a row where they go to double overtime and the winner is decided by the judges. May be we should take "Cobrinha's" suggestion and set up a no time limit submission only between these two so they can go crazy and try to catch each other rather than neutralize each other.

Kron Gracie was the best of the event in my view with 4 submissions in 4 matches including one incredible win with 3 seconds to go on match #2. Kron was on a mission and it showed. Close to that was "Cyborg" with a 3rd in the weight and the win in the Absolute. His performance in the Absolute finals against "Buchecha' was perhaps the best I've ever seen him fight. And "Buchecha" with a gold in his division and second in the Absolute. I take Cyborg over Buchecha simply because the Absolute title to me means more.

JT Torres is coming on strong and may be a huge force on the next edition. Keenan Cornelius showed that he is almost there but again needs more seasoning. Miayo had a great campaign but his weakness was the fact that he can't fight standing, in the end people neutralizes his game and he'd lose by pulling guard in overtime. Again this is ADCC not JJ

It was great to watch Barral win his division. After many injuries and premature retirement, Romulo found renewed energy and has been rewarded for his efforts with a World BJJ and now ADCC titles in the same year. Dean Lister is perhaps the nicest competitor on earth, always genuinely stoked with winning or not and always a sportsman to his opponent's whether in victory or defeat. Perhaps he is too nice and needs to get a little more aggressive as he was in his winning times.

Joao Assis was great in winning his division but a huge assist has to go to his coach Leo Vieira. Leozinho, who has become one of the best strategists in the game, was telling Joao every step to take with precision and every time Joao executed Leo's instructions (which he did very well) he'd succeed

Buchecha showed he is a top level with or without the Gi. Look for him to take the weight and Absolute next time.

Master Superfight: Two masters not wanting to give an inch negated each other for 20 minutes. Ze Mario deserved the win

Superfight: Andre Galvao was at another level and did what no one had done to date, win a Superfight by submission and against none other than the ever dangerous Braulio Estima. When Galvao is on, and he is on most of the time, he seems to be able to shift a couple of gears and go into a speed that is hard to contain. He did that in the Superfight and got the choke

In the Ladies division Michelle Nicolini got gold over arch rival Luana Alzuguir. These two always fight great. Gabi Garcia was once again superior and with no peer in her division.

Special mention to the Polish athletes Maria Malyjasiak who choked out Penny Thomas and Oscar Piechota who beat Claudio Calasans (weight division) and Vinny Magalhaes in the Absolute. The Polish fighters are a force in ADCC