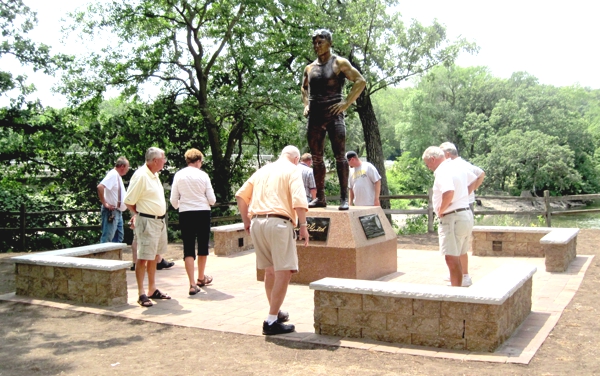 On July 4, a crowd of over 400 persons braved 100-degree temperatures in Humboldt's Bicknell Park to see the unveiling of a statue to honor the city's favorite son, sports legend Frank Gotch.

Born and raised in Humboldt, Gotch became world heavyweight wrestling champion in 1908 and ruled supreme until retiring undefeated in 1915. At his peak, Gotch was the best known athlete in America. He died in December of 1917, at the age of 39, from kidney failure.

Gotch's popularity is considered the prime factor in the State of Iowa's tremendous interest in wrestling. A committee was formed two years ago in Humboldt to raise funds for the statue, which is an eight-foot bronze sitting on a three-foot pedestal. The statue is surrounded by a brick walkway, with concrete seats on all four corners.

Mike Chapman, publisher of Iowa History Journal and the author of three books about Gotch, was the guest speaker, along with Steve Reimers, committee chairman, and Jeff Adams, sculptor. Special guests included Bill Smith, 1952 Olympic champion who lives in nearby Bode, and Brad Rheingans, a two-time Olympic wrestler who wrestled professionally for over a decade.

Bicknell Park is where Gotch trained for his epic match on September 8, 1911, in Chicago against George Hackenschmidt, known as the Russian Lion. Some days, as many as 2,000 persons watched Gotch training for the match.

For more information, go to: http://www.mike-chapman.com/.