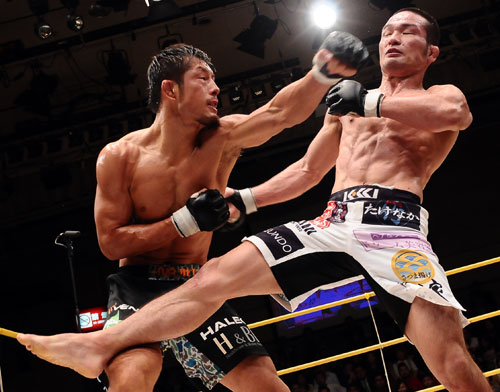 18 days after the fight, DEEP decided to overturn the decision made by three judges and awarded W to Katsunori Kikuno.

This fight took place in the DEEP 60, on October 19th, against Yasuaki Kishimoto.
Two judges scored this bout a draw while one judge gave to Kikuno. Therefore, this fight was declared "draw" but Kikuno's camp quickly filed a complain. DEEP promoter and DEEP judges accepted this complain, held a deliberation and the following is the official comment from both promoter and judges in regards to this matter:

"Initially two judges thought both fighters never scored a 'decisive blow' therefore scored this bout a draw. However, on the ground, for the entire three rounds, Katsunori Kikuno controlled the positioning, and also, he ruled the back of Kishimoto as well".

Given what is stated in the DEEP official rules III, which is about criteria for judging, DEEP has decided, Kikuno took initiative in both offense and defense, therefore, re-scored this bout to 3-0.
Now Kikuno is the official winner of this bout and Kishimoto got another L and he is now on a two-fight losing streak.