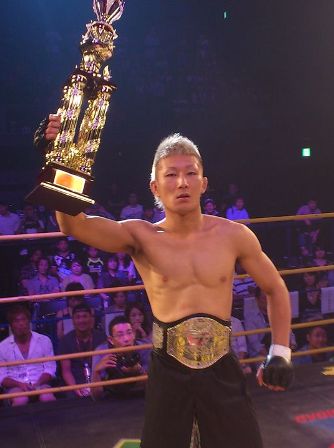 The eight-man championship tournament began back in March has concluded, and DEEP crowned an inaugural flyweight champion on Sunday in Nagoya.

Four survivors fought semi-final bout in the afternoon part of the show, and the winners of these bouts collided at the headliner of the evening part of the show. So both Yuki Motoya and Akira Kibe had plenty time to rest between the fights.

As expected, Kibe, a heavyweight favorite of this tournament, Kibe, finished Akito Sakimura in the first round. He took the a veteran from GSB Nagoya to the ground rather easily then got the back-mount position, and from there 35-year old from team Splash just went for ground and pound, and it was all over.

On the other end Motoya needed entire two rounds to beat Nayouki Kato in an unanimous decision.
Motoya looked full of energy yet his techniques seemed bit rough.

However, in the tournament final, the energy of 22-year old just took over the fight.

Motoya's right frontal kick landed squarely on Kibe's chin and basically that was it. Kibe went down and Motoya chased with couple of pounds. However, the referee stepped in very quickly to stop the fight, and declared Motoya as the winner of DEEP flyweight championship fight.

Now, Motoya is the youngest champion in the history of DEEP but after winning three fights in this tourney, his pro record is only 6-3 and one of the guys he lost in the past, Takeshi "Agar" Kasugai is currently on a four-fight winning streak with much superior pro record of 8-2. In addition, this win over Kibe can be considered as "lucky frontal kick" too so Motoya probably needs to win couple more against good fighters to be truly recognized as a champion.

Report by Shu Hirata
Photo courtesy by DEEP blog: The Wilde Side of DEEP
http://www.deep2001.com/blog2/