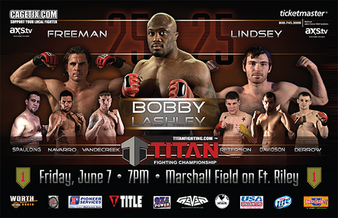 Asplund looked out-matched from the get-go as Lashley scored an easy takedown early in the first round and quickly moved to mount. Asplund escaped briefly to his feet, but not for long as Lashley scored with knees and then a takedown. Lashley spent the remainder of the opening round in top control where he opened Asplund up with elbows and punches, then took full mount before the bell.

After a few punches and a brief struggle in the clinch, Lashley took Asplund back to the ground early in round two, took side control and locked on a Keylock submission forcing Asplund to tap out at the 1:23 mark.

Now in his fifth year as a professional there are many who would like to see Lashley take a step up in competition. The problem in the past has been though that every time he does that he loses. So what to do? Keep trying. He can't keep fighting this type of competition if he ever wants to move beyond the regional level.

Lashley stated after the bout he has intentions of eventually moving to light heavyweight, but at 240+ pounds and built like Mr. Olympia, that sort of weight cut is going to take time. At 36-years-old time is not on the side of Mr. Lashley if ever plans to truly make a memorable impact on the sport.

In the Titan FC 25 co-main event Kansas' Jake Lindsey improved his unbeaten streak to 8-0 with a first round knockout win over Missouri's Zach Freeman.