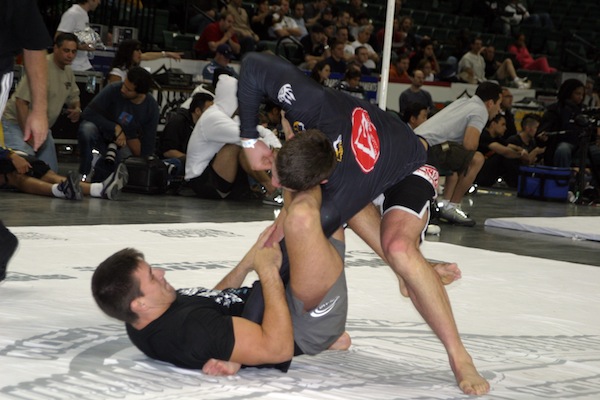 Back in March 2007, if you asked the MMA world, who was Demian Maia, nobody would have an answer. Demian only had a few fights in Brazil and one in America, but he was not known to the mainstream MMA fan base of the UFC. This all changed once he competed at the ADCC.

Entering the under 88kg division, this was Demian’s second shot at competing for ADCC. He was previously the Brazilian trials winner and runner up in his division at the ADCC worlds losing a narrow match to team mate Ronaldo Jacare in the finals. But this year was different. Demian was a man possessed and came for one thing and one thing only….victory!

Demian;s first match was against a somewhat unknown grappler at the time but more so known now by the name of Yushin Okami. Demian took the match to the ground quickly by pulling guard, and attempted a series on intricate closed guard submission and sweep attacks. Although not the most exciting match, Demian worked enough to edge out the decision.

His second match was against one of the U.S’s top grapplers of all time…Rafael Lovato Jr. Rafael defeated Finish grappler Marko Helen and was highly regarded as one of the favorites for this division. However the crafty Maia was able to secure superior position and once again got the victory.

His next match was not just a tough match because of the technical level of his opponent or for the fact his next opponent just beat future champion Braulio Estima, however it was his toughest match as he was facing his old team mate and friend, Tarsis Humphreys. Tarsis, was one of the Alliance teams newest stars and was coming into his own. Demian, once a team mate, had to be very careful with this match as not only was he facing Tarsis, but he also had to challenge his skills against his old coach Fabio Gurgel who cornered Tarsis. The match, was super technical and definitely hard for Demian to take as he and Tarsis must have exchanged positions in training before hand. However, as Demian Maia always does, he kept with a slow steady pace that was just too much for the new Alliance star to handle and walked away victorious yet again.

Now the stage was set. Demian was once again in the finals. This time against Flavio Almeida who had defeated rising star Romulo Barral, Sauli Hellimo and Rick Macauley. Flavio, nicknamed Cachorinho, is brother to Ricardo Almeida who was former ADCC champ. But Maia, not intimidated, once again fought with the same pace, strategy and victory. Demian was able to secure his closed guard, which had been effective throughout the competition, and eventually the armlock submission for the win.

Demian had just became the ADCC world Champion! He demonstrated throughout the tournament, the effectiveness of a strategic closed guard, combining submission attempts, control, and sweeps. At this current time, Demian was training with one of the best teams in the world, Brasa, alongside than team mates, Leo Vieira, Andre Galvao and Robert Drysdale, who all did amazing in their respective divisions. However, Demian was the only one from the team, to take the gold in the regular division, and the glory and a few weeks later, he got the call and invitation to compete in the greatest MMA organization in the world…the UFC!

This weekend, Demian Maia is making his UFC debut in the under 170 pound division. After having 13 fights in the UFC with a career now spanning almost 6 years, we eagerly await to see the new and improved Demian Maia, and maybe, just maybe, we will get to see the grappling dominance once again that he used to win ADCC and also the fans of the UFC.