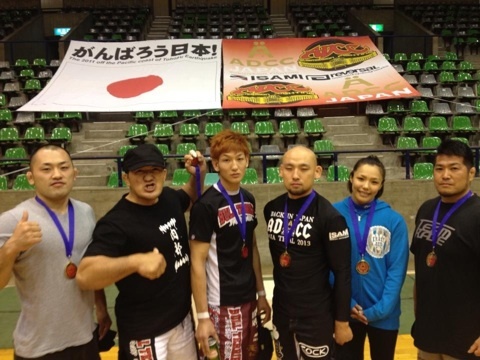 In Japan, the biggest news of this trial was a participation of Seiko Yamamoto.

She is the younger sister of Norifumi KID Yamamoto that won Wrestling World Championships four times in three different weight classes. (under 51 kg in 1999, under 56 kg in 2000 and 2001, and under 59 kg in 2003) Her older sister Miyu Yamamoto is also a former world wrestling champ. All three of them used to be on many TV variety shows in Japan. Not too often now but still, all three of them are relatively known. And that is the reason why Yamamoto's entry to this trial attracted many Japanese media.

Although ADCC is a submission wrestling with its own original point system, Yamamoto had no problem winning her division. And, in the process, she defeated a former ADCC world champion Sayaka Shioda and Strikeforce veteran Takayo Hashi.
Actually it wasn't even close. Yamamoto comfortably scored many takedown points on not just against Shioda and Hashi, but also, against all of her opponents. Also on the ground, she was able keep top position and defended all of submission attacks. Apparently she has been training at KILLER BEE, her brother's MMA team. Even though her last official competition before this trial was back in 2009 when she conquered Polish Open as a freestyle wrestler, she was far better than rest of the competition at this trial.

I always thought she is one of very gifted athletes in Japan that may have a great chance to do very well in MMA. At age 32, she may not be so young but not exactly too late considering her natural talent and, obviously, a strong base built from years of wrestling.

In addition, she belongs to the same weight classes as Ronda Rousey, so that should stir the imagination of many Japanese fans.

Besides, if Yamamoto does MMA, she could attract a big attention from Japanese mainstream media and that is what Japanese MMA desperately needs right now.

So, let's hope she would show some interest in MMA through competing at ADCC World Championships.